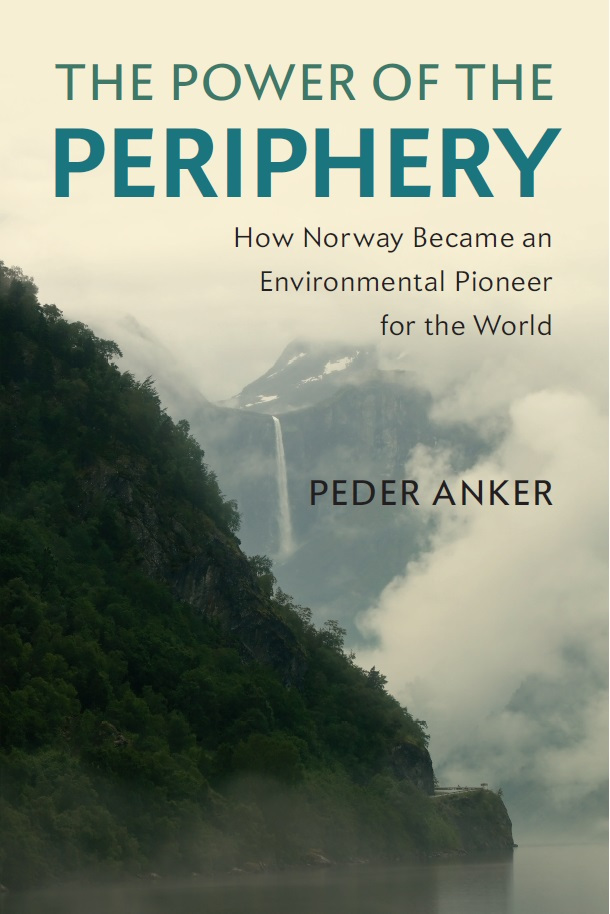 Historian Peder Anker (NYU) shares an excerpt from his book The Power of the Periphery: How Norway Became an Environmental Pioneer for the World which explores the Norwegian brand of environmentalism.

Norwegians like to think of Norway as being an alternative environmentally sound nation compared with the rest of the world. Their diplomats fashion the country as a microcosm for a better macrocosm, while laypeople proudly posts images of beautiful nature on social media visible for the world to see. Abroad Norwegians have met a receptive audience for this, especially among activists on the progressive left in the United States admiring everything Scandinavian. For example, when US Congresswoman Alexandria Ocasio-Cortez promoted a Green New Deal in an interview for CBS’ 60 Minutes, she pointed to Scandinavia and Norway as exemplars of environmental socialism. In doing so she appealed to deep-seated longing for the politics of this region among her audience. Indeed, she taped into a deeper history of foreigners portraying the Nordic as a better place reaching back to Mary Wollstonecraft’s idolization of Norwegian women in the 1790s.

The idea of being an environmental pioneer country has been an integral part of the Norwegian government’s general foreign policy of making Norway into a “humanitarian superpower” and “peace nation,” thus mobilizing Norway as the world’s environmental leader. The so-called Brundtland Report of Norwegian Prime Minister Gro Harlem Brundtland, entitled Our Common Future (1987), is perhaps the most telling. Norway was to set the global standard. Similarly with the Norwegian Prime Minister Jens Stoltenberg who, in his capacity as the United Nations Special Envoy on Climate Change between 2013 and 2014, pointed to Norway as an example of sustainability and climate leadership. More generally, Norwegians abroad—especially those who see themselves as left leaning and progressive—often seek to shine as representing the good people in the world, the example to which we all need to aspire with various schemes for environmental improvement, such as deep ecology, eco-politics, eco-theology, sustainability, carbon emission trading, and more.

Given the do-gooding environmental gaze, one should imagine that this would lead to sound environmental policies at home. Yet that’s not necessarily the case. The high ideals of sustainability may have captured the longings of the nation, but they do not so easily transfer into practical politics or behavior of everyday life. The pushback from industrialists and the powerful oil lobby has been considerable and many anti-environmental practices continue unabated. Some examples of such practices include the hunting of whales, wolves, bears, and lynx; the dumping of toxic mining waste in the fjords; overfishing; pollution caused by salmon aquaculture and industrial farming; the construction of hydro-power dams; and, more recently, the building of windmills and electric transmission grids in wilderness areas. Not to mention the day-to-day politic of pumping as much petroleum as possible up from the nation’s numerous oilrigs despite knowing that this contributes to environmental ills and climatic change. This raises the question of how the greenwashing succeeded.

Ask a Norwegian about their life in their cabin and you will be able to build an image of their deepest dreams and desires. As they see it, life and nature in the periphery is morally superior and the source of everything good. For example, a Norwegian’s social media account will likely include happy selfies from life in remote nature and not from urban environments. The power of these peripheries conveys a pristine natural environment in contrast to the dirty center in need of change. At the local level, it’s the cabin by the sea or on the high mountain away from the city. On a global level, it’s that of beautiful peaceful Norway contrasted to a polluted world in trouble. The power of the periphery is a system of belief that has allowed Norwegians to showcase their country as an environmentally sound nation compared to the rest of the world, and it may explain how to the greenwashing of Norway came about. To them, Norway is an admirable environmental microcosm for a better macrocosm. Sustainability is the imagined life Norwegians strive for while on vacation in their cabins. The reality of Norwegian industrialism, however, is quite different from weekend life in the mountains and the fjords. And the high ideals of the cabin may hinder a serious debate among them about the environmental policies of the nation.